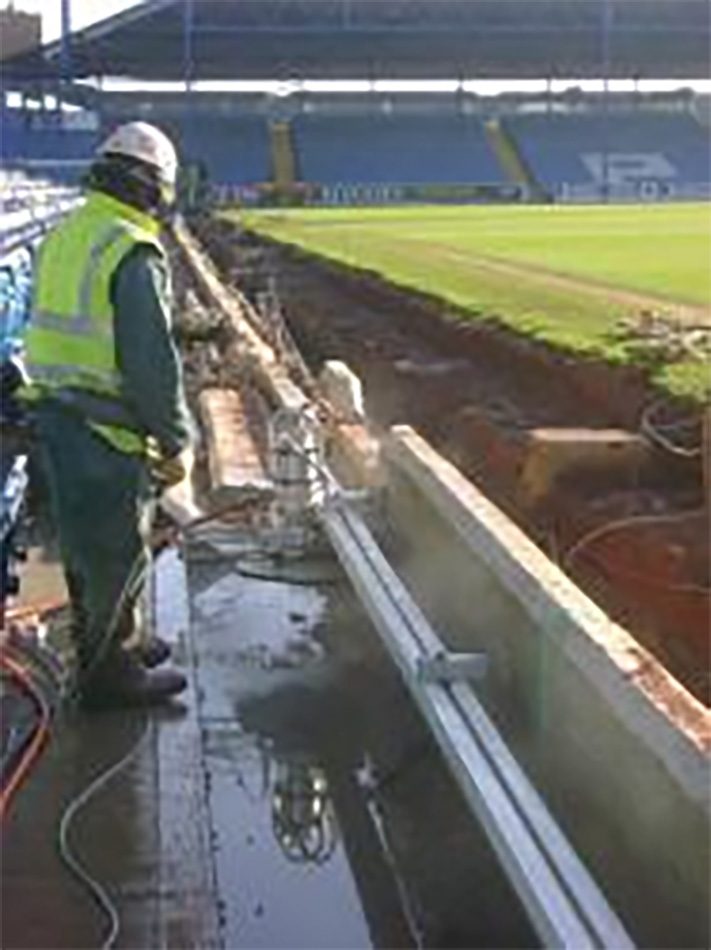 The latest technology in tracked concrete sawing has delivered a stunning result at the home of once FA Cup winners Portsmouth FC.

As a result of investment in high-frequency wall saw equipment by Chichester-based Technical Concrete Cutting (TCC), the company was able to undertake some concrete surgery in rapid time at the club’s stadium at Fratton Park.

TCC, which specialises in concrete cutting, drilling and crushing, won the contract to reduce the height of two 175mm-thick pitchside perimeter walls by 600mm to improve the line-of-sight for supporters sitting close to the playing surface – and to enable the installation of state-of-the-art electronic advertising hoardings. The total length of wall to be cut was 175m.

Like any Premier League club, Portsmouth counts its advertising revenue as an extremely important income stream and its investment in electronic hoardings provides the club with a new dimension for advertisers. Speed was of the essence for the football club and the contractor because Pompey wanted the project completed within a three-week window in which no home matches were due to be played, so TCC decided that tracked sawing was the preferred method. This was due to both its speed of execution, and from a health and safety perspective since the unit is operated remotely, which overcomes any concerns over operator vibration.

With the risk assessment complete and budgets agreed, TCC started work and immediately put its remotely operated Pentruder high-frequency tracked wall saw to work. The company recently invested in the 27kW machine to replace its hydraulic counterpart that had seen many years successful service but which was unable to compete in terms of manual handling and performance.

Step one was for the front row of seating to be removed. Even so, space was at a premium, which was another reason for introducing the lighter weight Pentruder saw. Another key factor was the quality of finish provided by the extremely powerful 600mm diamond blade used in order to minimise the risk of over-breaking the concrete structure, therefore ensuring that only minor remediation work would be needed.

The electronic hoardings required that the pitchside space in front of the perimeter wall be excavated. The tracked saw was bolted into place and the wall cut at the required height and then broken into small sections using a light breaker, with the concrete debris taken away for recycling. A new concrete duct was put into place, onto which a steel structure was fitted to hold the electronic hoarding.

As the tracked wall saw used three-phase electric, the whole operation was very quiet. The special fast-cutting blades developed by Nimbus Diamond Tools ensured rapid cutting of the concrete despite standard reinforcement bars and the discovery of old railings within the concrete from a previous era. The blade was water cooled/lubricated to prevent dust and the resulting slurry was controlled using an industrial wet vacuum system.

In all, nine days were allocated for the work and the project was completed several days ahead of schedule, thanks to the power of modern equipment and the effectiveness of the high-speed cutting blade.

TCC was very pleased with the progress of the job and the quality of the finish achieved using the electric wall saw. As well as finishing ahead of schedule the project was fulfilled exactly to specification with minimal environmental impact and no damage to any other structures.

The high-speed saw provided a perfect result, enabling a new structure to be created for pitch-facing electronic advertising hoardings and guaranteeing premier viewing angles for supporters as a result of the lower pitch-side walls.

At Technical Concrete we use cookies to make our site work well for you and so we can continually improve it.

Necessary cookies enable core functionality such as security, network management, and accessibility. You may disable these by changing your browser settings, but this may affect how the website functions.

We also use analytics and marketing cookies to help us understand what content is of most interest and to improve your user experience. The cookies collect information in a way that does not directly identify anyone. It’s your choice to accept these or not. You can either accept all, reject all, or use the settings link to choose and save individual choices. You can change your choices, and delete all cookies, at any time.

This website uses cookies to improve your experience while you navigate through the website. Out of these cookies, the cookies that are categorized as necessary are stored on your browser as they are essential for the working of basic functionalities of the website. We also use third-party cookies that help us analyze and understand how you use this website. These cookies will be stored in your browser only with your consent. You also have the option to opt-out of these cookies. But opting out of some of these cookies may have an effect on your browsing experience.
Necessary Always Enabled
Necessary cookies are absolutely essential for the website to function properly. This category only includes cookies that ensures basic functionalities and security features of the website. These cookies do not store any personal information.
Non-necessary
Any cookies that may not be particularly necessary for the website to function and are used specifically to collect user data via analytics, ads, other embedded contents are termed as non-necessary cookies. It is mandatory to procure user consent prior to running these cookies on your website.
Functional
Functional cookies help to perform certain functionalities like sharing the content of the website on social media platforms, collect feedbacks, and other third-party features.
Performance
Performance cookies are used to understand and analyze the key performance indexes of the website which helps in delivering a better user experience for the visitors.
Analytics
Analytical cookies are used to understand how visitors interact with the website. These cookies help provide information on metrics the number of visitors, bounce rate, traffic source, etc.
Advertisement
Advertisement cookies are used to provide visitors with relevant ads and marketing campaigns. These cookies track visitors across websites and collect information to provide customized ads.
Others
Other uncategorized cookies are those that are being analyzed and have not been classified into a category as yet.
Save & Accept
Powered by